Over 150 years ago the San Francisco Bay Area experienced massive growth and wealth during a time in history that we have all come to know as the gold rush. The participants, who would become known as the Forty-Niners, flocked from all over the world to tr 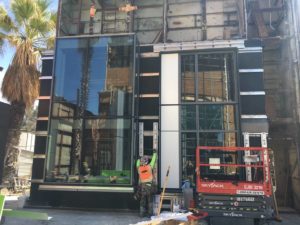 y and strike it rich, to claim their piece of the pie. These people contributed so much to the growth of the area even the local NFL team is named after them (no not the Raiders).

150+ years later and the Bay Area continues to experience massive growth. Go into San Francisco and you see as many cranes as you do sky scrapers…and we are excited to say that one of these cranes is being used on our next project right in the heart of the city. A beautiful 14 story apartment building that will feature over 50,000 sqft of terracotta rainscreen façade panels supplied by CB Products is going up at this very moment!

But before any panels go on the building we get to be involved with the performance mock-up of the façade to test for water penetration and of course the ever present seismic activity that San Francisco experiences. A new project AND we get to have our system put to the test? We love it! 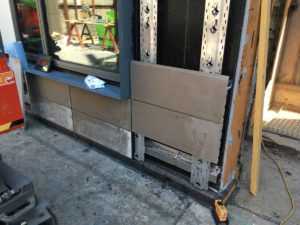 With the performance tests scheduled to happen near the end of the month we were able to spend some time at the mockup site this week to support the crew as they began installing the rainscreen system. We are lucky enough to be working alongside a team who is very familiar with our products and system but the mockup provides us a “dress rehearsal” opportunity to discuss possible scenarios and solutions we may encounter when installing on the job site. Just another reason why our system is able to be installed up to 50% faster than traditional systems.

We will revisit the mockup again near the end of the month and the pictures and videos that go along with the results. Have a great Labor Day Weekend!